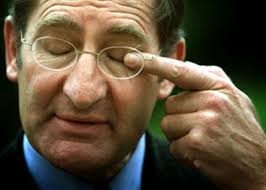 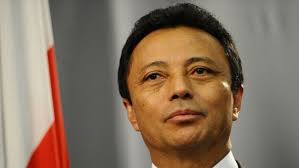 For the past 20 years I have worked in peace process facilitation and democracy enhancing. I regard myself as an independent practitioner even although in most instances my introduction to a peace process is through one of the parties. I endeavour to serve the peace process rather than the interests of a single party.

As a result of concerns about the recent election process in Madagascar and the election results being published by the CENI-T, Mouvance Ravalomanana and the Dr Robinson Campaign requested me to examine possible instances of voter fraud and / or anomalies that seem to be emerging from the CENI-T. I travelled to Madagascar on the morning of 26 December and was there until 29 December.

Having carefully considered the evidence that was presented to me, there are, in my considered view, three areas of concern that could have a material impact on the outcome and as a result render the election process  unfair and / or the outcome not a reflection of the will of the voters as expressed on their collective ballot papers.

With regard to unfairness, there are two aspects:
1.       The participation of President Rajoelina in the campaign of Mr Hery, in contravention of article 15 of the Roadmap. There can be no doubt that President Rajoelinaâ€™s presence in Mr Heryâ€™s campaign and his outrageous reference to Mr Hery as the Stateâ€™s candidate would have unfairly swayed a considerable number of voters. In a nutshell Mr Hery had an unfair advantage over Dr Robinson. As we know this issue has been referred to the Electoral Court and I hope it will deal with the matter appropriately;
2.       The question of undue influence in persuading voters to vote for a particular candidate. Here I am referring to the buying of votes and the issuing of pre-marked ballot papers in favour of Mr Hery. This issue has also been referred to the Electoral Court with a request that all ballot papers be reviewed and the fraudulent ones removed. Although this process may delay the final results, surely a fair and accurate result reflecting the true will of the votes, whether in favour of Mr Hery or Dr Robinson is worth waiting for. For post-election political stability I would think that transparency is crucial. The election must not only be fair it must also be seen to be fair. If there are perceptions that Mr Hery cheated those perceptions must be addressed. If the review shows that ballots were not bought as alleged and that Mr Hery won the election fairly, democracy will be the victor.

With regard to the will of the people, I have been shown countless examples where the results published by the CENI-T do not appear to be a true representation of the results recorded on the forms completed and signed by all candidates at the polling stations. To the extent that the CENI-T computer published results deviate from the hard copy results, the former must be corrected.

I will forward your Excellencies examples of mistakes / anomalies found in the CENI-T results. They are sufficiently significant that they could have a material impact on the outcome. For that reason I wish to propose that one of the international Auditing Firms be given the task of auditing CENI-Tâ€™s computation / interpretation of the hard copy results generated at the polling stations.

Your Excellencies, once you have taken note of the mistakes / anomalies to which I refer I would hope that you share my concerns and support the proposal for a professional audit, which could be carried out quickly. Such an audit will also deal with perceptions of bias and or cheating and thereby contribute positively towards a nation-wide acceptance of the result irrespective of who the winner is.

In this email I am able to show your Excellencies an example of what appears to be proactive wilful cheating by at least one person at the CENI-T. However, having been given a tour of CENI-T and seen all the checks and balances in place it is more likely that this fraud could only have happened with the collusion of others.

Dr. Robinson won Andilamena a small district of about 25, 000 voters. He got support from 65% of the voters who went to the polls giving him around 8,000 votes. You will find that result in attachment ConsResultatDistictEtat(3). If your Excellencies look at  attachment ConsResltatEtat(2) which relates to another district (Moramanga) which has more than 100, 000 voters your Excellencies will note that the attachment is merely a copy of the Andilamena result. I am told that Moramanga like Andilamena is deep Dr. Robinson territory and he is expected to receive around 65% of votes cast there as well. Assuming the percentage vote was the similar to Andilamena he would have 32, 000 votes there and not a mere 8, 000. Bearing in mind that the 4% difference between the candidates is only around 200, 000 votes this anomaly on its own is significant.

I will shortly provide many more examples of anomalies / mistakes at the CENI-T which support my proposal for an independent audit of CENI-T as analysis and computation of the election results. 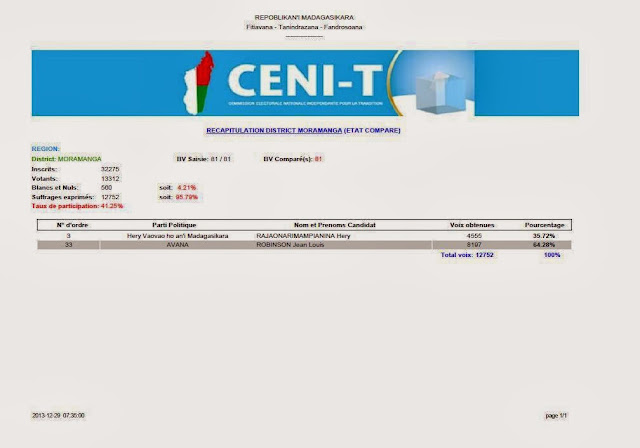 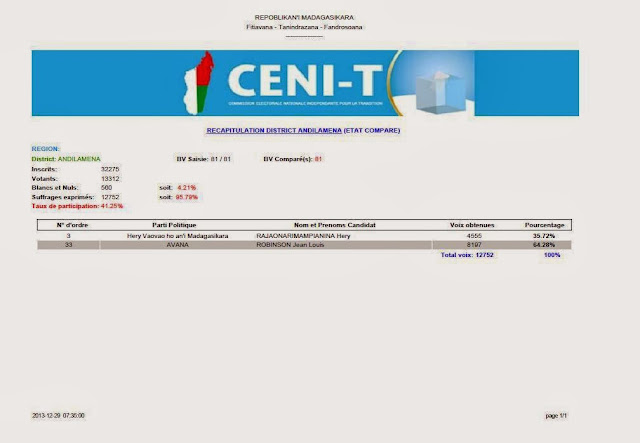